Last month, Elon Musk beat out Jeff Bezos for a 2.9 billion contract from NASA to fly one of his magnificent exploding rocket ships to the moon. In true American fashion, Bezos whined and cried that this wasn’t fair. So, today, his servants in the United States Senate are literally falling all over themselves to give Master Bezos 10 billion dollars for HIS vanity space project Blue Origin. That's 12 billion dollars in taxpayer money being handed over to the two richest human beings on the planet so they can play Captain Kirk.

Meanwhile, all the geese on cable news are honking about how big fat government handouts in the form of unemployment insurance are keeping the peasants from returning to their crappy minimum wage restaurant jobs, and this is causing labor shortages and businesses to fold and oh doesn’t this just go to show that we need to get rid of those wicked big government handouts . . . 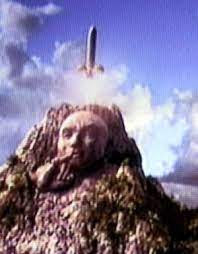