I just got back from Barrow, Alaska, where I’ve been holed up for the last ten months. I randomly applied for a teaching job up there last July and, to my horrified surprise, the principal called me the very next morning. Two weeks later all of my worldly belongings were stashed in a storage shed and I was on a plane.

(“All of my worldly belongings” are: a bed, a desk, about fifteen boxes of books, a dresser, and a 1999 Honda CRV with two hundred thousand miles on it; I also had a TV but I threw it away. I live like fuckin’ Ghandi, partly by choice but partly from financial want).

Fun facts about Barrow: It’s real name is Utqiagvik, which means “the place where we gather roots” or “the place where we hunt snowy owls,” depending on who you ask, but it doesn’t matter because nobody can pronounce the word anyway, so everyone still just says Barrow. It’s about three hundred and thirty miles north of the Arctic Circle — the northernmost town in the United States — and there are no roads in or out. From November to January the sun doesn’s come up; from May to July it doesn’t go down. It’s always cold. The temperature got as low as negative 36 with negative 60 wind chill. The hottest it will get in the summer is between 47-50 degrees.

The tallest structure in town used to be the Presbyterian church, now it’s the Wells Fargo building. Out with the old God, in with the new …

There is nothing, absolutely nothing around for hundreds of miles but bleak and forbidding tundra; to the north, just a few blocks from my front door, is the Arctic Ocean, which looked like this one afternoon last August: 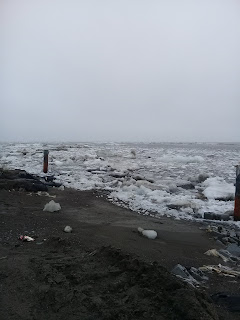 It’s a desolate and forlorn place. The homes are mostly shacks cluttered with car and snow mobile parts. It’s too expensive to haul things away, so shit just stays wherever it breaks down. It’s a dump. 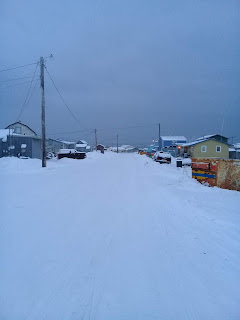 Barrow has a thoroughly modern infrastructure courtesy of the Great God Oil from nearby Prudhoe Bay, but some places still lack running water. A truck has to deliver water to them; another one comes by to pick up their honey buckets. You get three guesses what a honey bucket is. Hint: they are buckets, but they don’t contain honey. 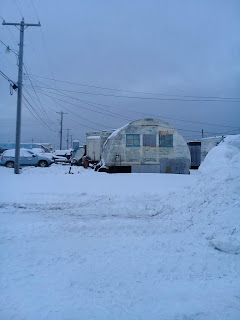 There aren’t any paved roads in Barrow. The whole town sits on permafrost, but the upper layers are constantly thawing and refreezing and shifting around. In the spring and summer some of the roads become quagmires: 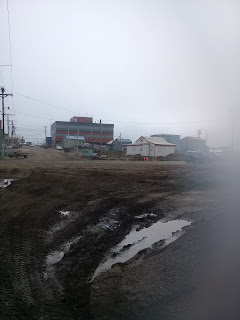 Here's downtown Barrow. The building on the right is the Presbyterian Church, which was built in 1899. In the nineteenth century, the missionaries made a deal and carved up Alaska between themselves. The Presbyterians got the North Slope. Around 1900, Barrow was wiped out by an influenza epidemic imported by white whalers (who also brought measles, tuberculosis, gonorrhea and alcohol). About sixty-percent of the population died. The Presbyterian missionaries said God was punishing them because they practiced shamanism and weren’t Christian. They later opened up schools designed to Christianize and Americanize Eskimo children. They were forced to speak English only in class. If they slipped up and spoke Inupiaq (their native language), they were hit. 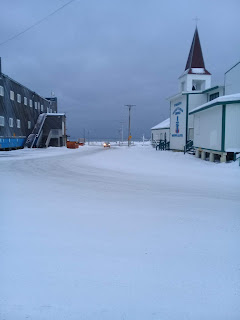 It is a surprisingly diverse place. Most of the town’s 4,500 inhabitants are Inupiaq Eskimos, but there are large numbers of Filipinos, Samoans, and Tongans. The cabbies are mostly Thai and the Chinese restaurant is owned and operated by Koreans; the Japanese restaurant is run by Japanese, but the pizza place is a Slavic affair, either Polish or Czech, I can’t tell which and I’m too polite to ask. The schools are dominated by white people, as is the hospital, with Filipinos acting as support staff. We’re like a tiny little outpost of American culture in the Arctic, imposing an outdated curriculum on restless and indifferent native kids, the American RAJ. It’s bizarre and, to me, a little unsettling (you could say I lack faith in what I do).

But the city and county governments are run by the Natives. Make no mistake about it, it’s their town, and their big thing, twice a year, is whaling.

I went out last October and watched a whaling crew haul up and butcher a bowhead whale. I’ll spare you the gruesome pictures and details. Suffice it to say that all of the whaling communities on Alaska’s North Slope have strict quotas on the number of whales they can hunt, and they use every portion of the whale, the skin, blubber, meat, baleen, everything (they leave what’s left of the carcass for the polar bears, which keeps them out of town). After the whaling crews have divvied out their own portions, the remainder is given away to the community for free. Even non-native residents can get some. It looks like this (and it most definitely does not taste like chicken: 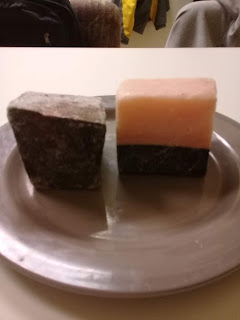 The one on the right is muktuk, which is raw skin and blubber. It doesn’t taste that bad. It’s very fishy but okay. If you said it was fish, cooked it up and threw it some kimchi or a salad, every foodie in San Francisco would rave about its boldness. But the skin is almost impossible to get down; it’s like trying to eat a piece of tire (if you boil it it’s much more palatable). Incidentally, muktuk contains vitamin C. That’s how the Eskimos avoided scurvy despite having a diet that was almost completely devoid of fruits and vegetables. The one on the left is the actual meat, which has a strong, rich flavor that doesn’t taste like anything else I can compare it too. You can only eat it in small doses.

By the way, the term “Eskimo” is okay. Most of the natives call themselves that, as does the state of Alaska. It’s an Ojibwe word that means “eater of raw meat.” Some find it slightly off-putting, but it’s really not an issue at all. Oh yes, they really do have a lot words for ice, though I don’t know if it’s actually two-hundred. They’re words that describe ice in different conditions, i.e., ice that’s safe to walk on, ice that isn’t, thin ice, thick ice, melting ice, sea ice, land ice, shifting ice, stable ice, etc.

There are a few more things that I need to mention, namely, oil and climate change, but these are huge subjects that deserve posts of their own, So I’ll leave off for now. Right now, I’m going to go sit in the sun. Cheers! 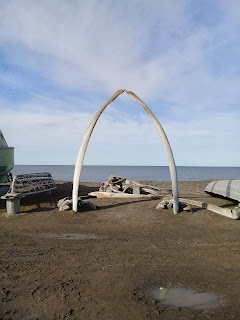 Great post. Would not be able to do that as I'm the opposite. Looking forward to more.

Yours crankily,
The New York Crank

Has confessed that he Ray Ban Sunglasses Sale was terrified by the thought of becoming the man of the family, Tim Vickery wrote in 2011. There was something else: his great motivations to play football were to make his father happy and, of Cheap Air Force Ones course, to make money. Indeed, as soon as alleged "attitude problems" brought real life repercussions, the wheels came off..

11, 2018" > >PETA asks Chicago to boycott Canada Goose in new ad: a Living Being, Not Jacket Filling >Darcel RockettDuck, Duck, Goose. Last winter, a person couldn't swivel on a Chicago street without seeing a Canada Goose coat in the periphery. Considered the Land Rovers of winter coats, the brand's red, white and blue circular logo with a map of the Arctic in the Cheap Jordan Shoes For Men center was impossible to miss.

Kindness is the fuel of civilization, politeness and courtesy Coach Outlet Sale its etiquette, its formalities, and dignity its aim. Civilization is about responsibility Coach Handbags Clearance for your own actions, and it is about tolerating other people's actions. One Michael Kors Outlet Online person trying to accept another's New Yeezy Shoes habits is the essence of civilization.