My All Time Favorite Movie Lines

Now that I have your attention …

Just kidding. It’s Sunday and politics have become a great big bore to me. I remain as firm as ever in my conviction that Jeb Bush will be the next president of the United States. I am not happy about this. I don’t want it to happen. I am just acknowledging reality. There will be a third Bush, America. It is written. We are sinners and this is our punishment.

And so what? Is he going to do anything substantively different than what President Hillary Clinton would do? Yeah, he’ll nominate some primitive, hanging judge prick conservative for the Supreme Court, some scowling, dehydrated, ass-puckered “strict constructionist” type who pines for the glory days of the eighteenth century; Clinton will nominate a solid liberal. He’ll oppose gay marriage; Clinton will support it. He’ll tell the rubes they should be able to wear sidearms to Disneyland; she’ll favor background checks, but only after carefully affirming her commitment to our Second Amendment rights. Viva effing democracy.

I won’t bore you with any more Hillary bashing, apart from saying that her phony baloney populism is an insult to anything with a fore-brain and opposable thumbs. I think she has genuine liberal sentiments, but ambition trumps sentiments in politics, and she’s running for president of the United States, not president of Sweden or Denmark, and we don’t truck with too much liberalism. Not one minute after she she snookers us libs into voting for her, she’ll be off to brunch with Lawrence Summers and Lloyd Blankfein, and they won’t be eating hot dogs and spare ribs like the folks. They will, however, be having Very Serious Discussions about raising the retirement age and cutting those wicked entitlements. They will be drafting her inevitable speech about “fiscal responsibility” that we’re all going to have to endure. Just watch.

But that’s moot. She is going to stumble and implode, allowing Jeb to squeak into the White House. Hearken unto my words, brothers and sisters, the third Bush cometh. Plan accordingly. He’s already cutting backstairs deals with Ralph Reed types to garner wingnut support. The media is already doing puff pieces about him; stay tuned for the companion series about his Venezuelan wife, his abiding Catholic faith, and his deep commitment to education reform. The country club that runs our increasingly dingy nation wants him in there and that’s that. The fix is in, suckers.

(They wouldn’t mind Hillary either, mind you, but the Chris Matthews, Howard Fineman, Maureen Dowd Axis of Vapidity can’t abide older ladies with wrinkles. I’m willing to bet that a plurality of voters can’t either. And don’t go throwing poll numbers at me. They mean nothing — NO THING — at this point in the election cycle. They just give nerdy Beltway types something to natter about on slow news days.)

Apollo 13. The lunar module is orbiting around the dark side of the moon. The crew has lost radio contact with earth, and they’ve had to cut the power down to conserve energy. It’s dark and cold. The situation is dire. One of the men then says to the Tom Hanks character, “It hurts when I urinate, Jack.” It cracks me up every time. The idea of chaude-pisse is more terrifying to me than being stranded in space.

Titanic, quite possibly one of the stupidest movies ever made. Worse, perhaps, than Shakespeare in Love, which is saying a lot — I couldn’t stomach ten minutes of that abomination, and this was on an eleven hour flight! I went back to the drink cart while the stewardesses were napping, made myself  a few Stoly drivers and watched Greenland pass by instead (alas, Iceland was covered by clouds. Maybe next time). Anyway, Leonardo and Kate are gamboling about on deck, giddy with new found love, when they hear the iceberg slash through the hull. Leonardo gravely informs his mistress, “This is bad.”

Planet of the Apes. One the best movies ever made, based on a novel by a great French author/satirist named Pierre Boulle, who also wrote The Bridge Over the River Kwai. Mention that bit of trivia to impress your friends, but it probably won’t help you get a girl into bed. What can I say? We live in an imperfect world.

Okay, we’re at the very end, when everyone is on the beach. Charleton Heston mounds his horse with the lovely, lovely Nova. Dr. Zira comments that she didn’t think humans were capable of monogamy, and Charleton Heston replies, “On this planet, it’s easy.”

Anything from Network, but especially Arthur Jenson’s (Ned Beaty’s) “The world is a business” speech. It’s one of the most astute descriptions about how the world really works ever made.

That’s all I can think of off the top of my head.

Just for the hell of it: 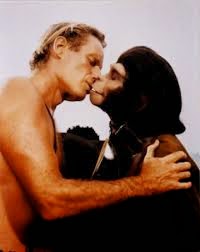 Been saying the same about jebber for a long time. Mercu is easy stupid enough to do that.

When that happens the first day in office these sonsofbitches will start dismantling our country and it's going to be worse than bad.

This transfer of wealth will make the last one seem like a kids game.

It IS gonna happen sure as shit!