I just took a little road trip through northern California and Oregon. The countryside is beautiful, but when you lower your gaze to the things of man you feel naught but desolation and despair. What a ghastly slum we’ve created. We slaughtered an entire race of people and deforested large tracts of land to put up Chevron stations and McDonald’s. If there is a hell we’re surely going to roast in it.

This is nothing new, of course. We turned the county into a standardized corporate purgatory years ago; a parking lot with identical neon signs in every town. But the cancer, I’m afraid, has spread to the liver and the brain. It’s terminal now.  Every place has the same Taco Bell, the same AM/PM, the same Burger King, the same Denny’s, the same Shell. And when you venture into these nothing places, you see the exact same sloven and degraded specimens of humanity behind the registers or milling around out front — tattooed crankster types wandering shirtless through the parking lots; obese rednecks with too tight cut-offs pushing baby strollers into the Carl’s Jr., and scraggly homeless people with dirty backpacks and beat up bicycles traveling in a daze from nowhere to nowhere. The permanent American underclass flourishing in its natural element.

If I was a foreign tourist I would tell people back home that America is a scummy, poor, boring and mildly frightening country. Stay away.

The downtown areas still maintain their individual character, but these seem like so many quaint little museums where you go to get a small taste of what life was like before Corporate America Inc. stamped its iron template down upon our heads. And even there you see the same motley dregs who dwell along the interstate. They are everywhere, the seedy new normal, the white trash remains of consumer culture gone bad. Unfortunately when this, our redneck Third Estate, gets the urge to rebel it will probably do so under the banner of some right wing monstrosity. But even that’s unlikely. These people are completely out of the loop. They are as cut-off, clueless and tuned-out as the proles in 1984.

Back on the road. To pass the time, you can listen to the same twenty classic rock songs over and over again: Queen, Foghat and Lynyrd Skynyrd on a continuous loop that will go on playing until the stars go dark and the Statue of Liberty lies buried under the sea. When you need to make sense of it all, you can switch over to the AM dial where legions of right wing talk show hosts and evangelical Christians are waiting to put it all in perspective for you.

A billboard for the Seventh Day Adventists says that Saturday is the Lord’s day, but that Antichrist switched it to Sunday to deceive us. An hysterical old woman who’s late for her nap tells Rush Limbaugh she has given up all hope for the country. Obama is letting the immigrants take over and Ron Paul is maybe the only politician you can trust anymore, and oh how she fears for her seven year old grandson. Rush tells her he understands, but soothes her with a quote — real or imagined — from Ronald Reagan, whom he calls Ronaldus Magnus: No matter how bad things seem, the country is worth fighting for, or something.

Back in California, a sign advertises for the State of Jefferson — the product of some tea party wet dream about parts of northern California seceding from big government liberals in Sacramento, or something.*

After about eight hours of this, you shake your head and start to wonder: What kind of fucking country do I live in, anyway? 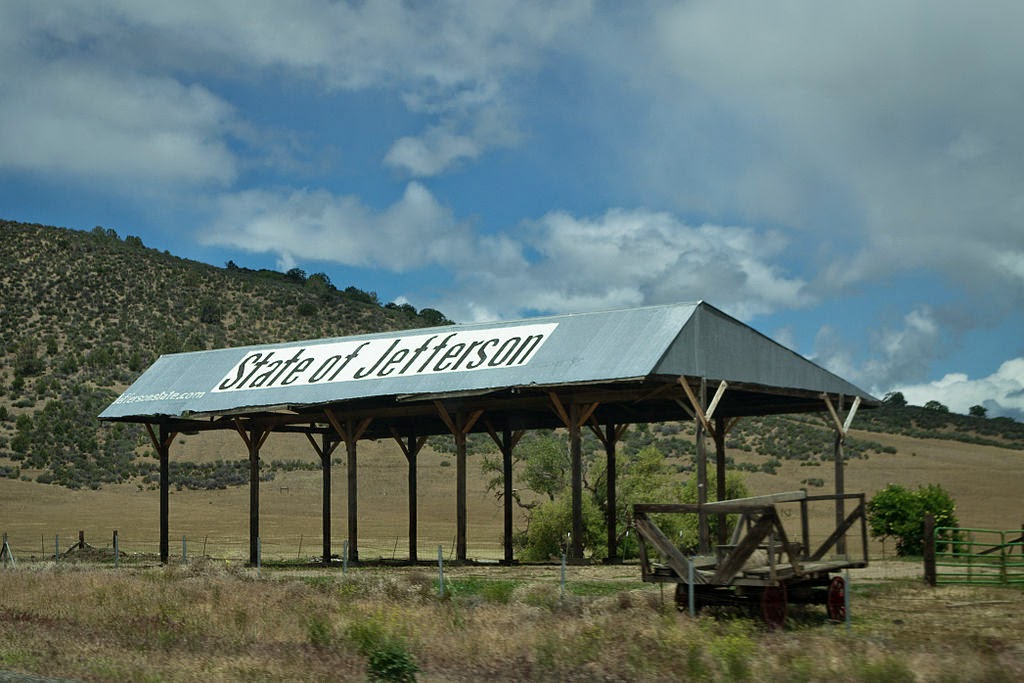 *Apparently this idea dates back to 1941, making it a pre-tea party wet dream.
Posted by O’Hollern at 4:57 PM